Facebook debuted its much talked about dating service yesterday that it announced at its developer conference F8 earlier this year in Columbia.  The social network doesn’t want to compete with Tinder, but instead will take on other major players such as OkCupid and Hinge by adopting a similar approach to matchmaking.

If you are an adult user in the South American country, you will see a notice at the top of the news feed to opt into the dating service. Facebook will ask you to verify your location using your device and add details such as a free-form bio, occupation, education, religion, and height. Thankfully, it lets you choose non-binary genders and sexual orientations. 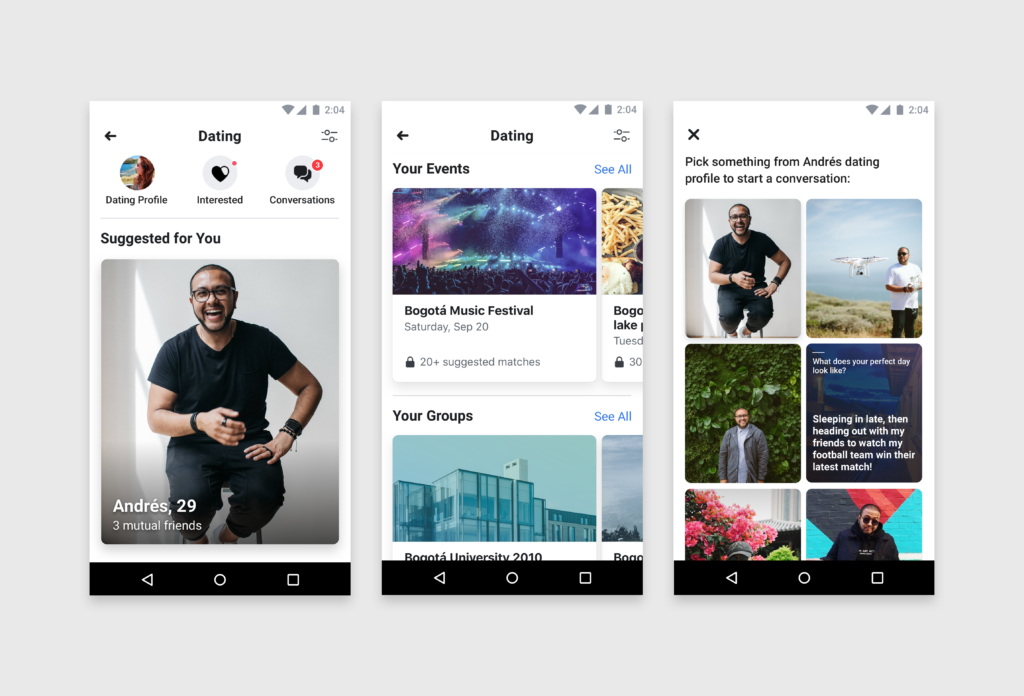 After you create your profile, you can choose preferences for matches like distance which is limited to 100 km , religion and height. Once everything is set up, you will see your suggested matches on the dating service home screen. You will only see friends-of-friends or total strangers as suggested matches; friends or blocked people won’t appear in the list.

You can browse through these profiles and send them a message by responding to one of their photos or a question they have answered. If they like you, they can start a conversation, or tap ‘not interested’ and never see you again. This flow pretty closely resembles how Hinge another popular dating app functions.

Facebook said that at the moment the service will be only available in its mobile apps and the messages will live in a separate dating inbox. It added that there currently aren’t any plans to build a standalone app for this service, or to integrate it into Messenger.

A rather unique thing about Facebook dating is the ability to match with people who are attending the same event, or are part of the same group as you although you do have to ‘Unlock’ each event to see if someone is attending it. That’s a smart way for the company to take advantage of two oft-used features of its platform. It’s kind of like the Places feature that Tinder rolled out this year to let you match with people who visit the same locations you’ve been to.

For safety and privacy measures, Facebook has kept almost every option of the service as an opt-in feature. Additionally, it only allows text and emojis in chats to avoid unsolicited pictures. Plus, Facebook fetches only your name and age from your profile to avoid revealing too much about you to people you don’t know much about.

While this new Facebook’s service could look familiar to folks who’ve tried other dating apps, it has the advantage of having a tremendous amount of user data to suggest better matches.