Pie is now available for the Pixel, Pixel 2, and Essential Phone, and it’s supposed to come to other phones that had beta access within the next few months. Unfortunately, not all of Pie’s biggest features are available from the start most notably, Google’s digital wellbeing” features are only available in beta on Pixel phones. But other features, like gesture controls and screenshot editing, are available to everyone able to install Pie.

There’s a lot of new features in Android Pie. Google is going to show you how much time you spend in every app. And, more importantly, it’s going to let you set time limits on how long you use them. 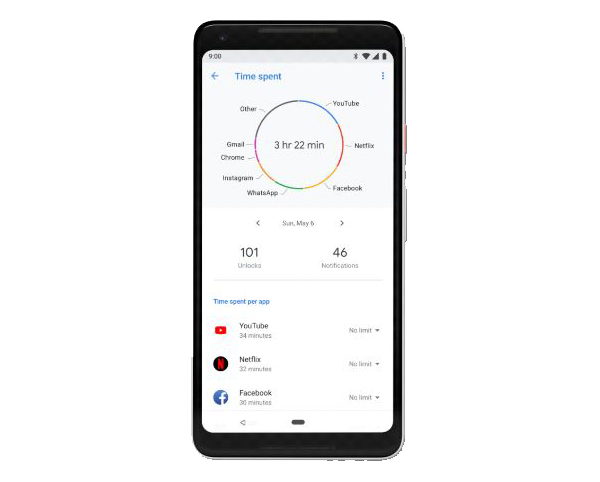 You’ll be able to limit yourself to a certain amount of time every day say, 15 minutes or an hour. After that time, the app’s icon will go gray. When you try to use it, Android won’t let you. Instead, a pop-up will tell you that you’ve hit your time limit. There won’t even be a button to ignore it and let you open the app anyway.

Google says it might tweak exactly how that works before the features exit beta; it’s also considering an option that will turn your entire phone black and white when you’re supposed to go to bed. Both are great ideas. Particularly over the past year, there’s been a rise in complaints about the time we spend staring at our phones. There have been parental control apps for a while now, but there hasn’t been an equivalent service that lets adults set limits for themselves.

These features aren’t being made available to everyone right away. If you have a Pixel or Pixel 2, you’ll be able to start testing them now, but other phones will have to wait. It sounds like the features will probably arrive more widely in October, when Google ships its next Pixel phones. 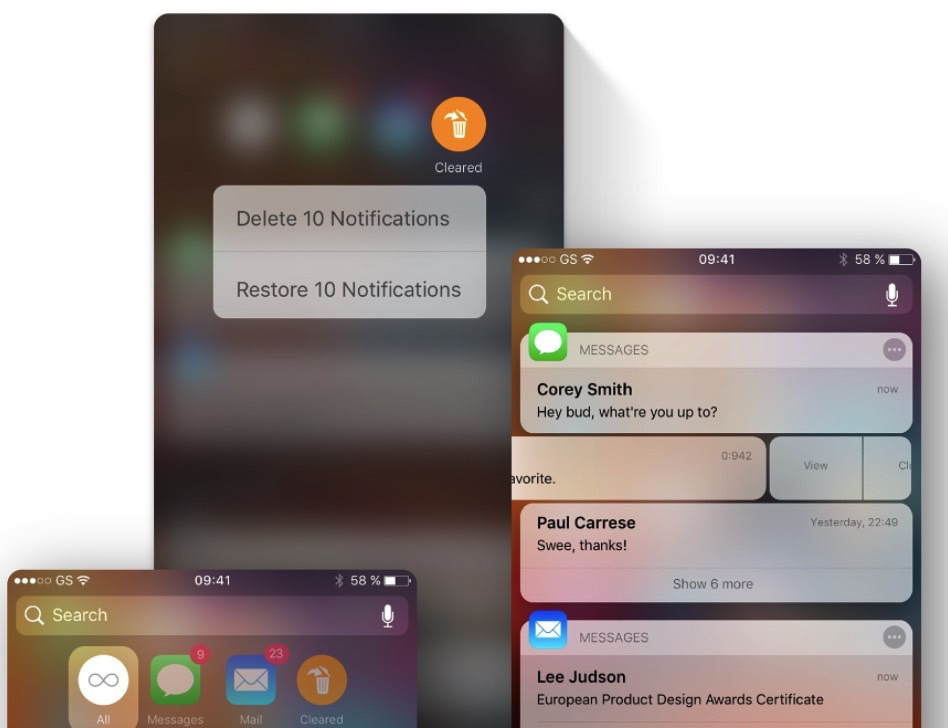 Notifications are a smartphone necessity. They’re also the absolute worst. Google is trying to do even more in Android Pie to get them out of your face. For one, it’ll suggest muting an app’s notifications if you keep swiping them away. But the even bigger thing is how much it’s beefing up Do Not Disturb.

Now, when your phone enters Do Not Disturb mode, you’ll be able to set it so that notifications don’t appear on-screen at all. Nowhere. Not on the lock screen. Not even in the notification drawer. You’ll also be able to turn on Do Not Disturb by flipping the phone facedown on a table. And if your phone is set up to separate your work apps from your personal ones, there’ll now be a toggle to mute all of them at once, which should be great for vacations or even just the weekend. 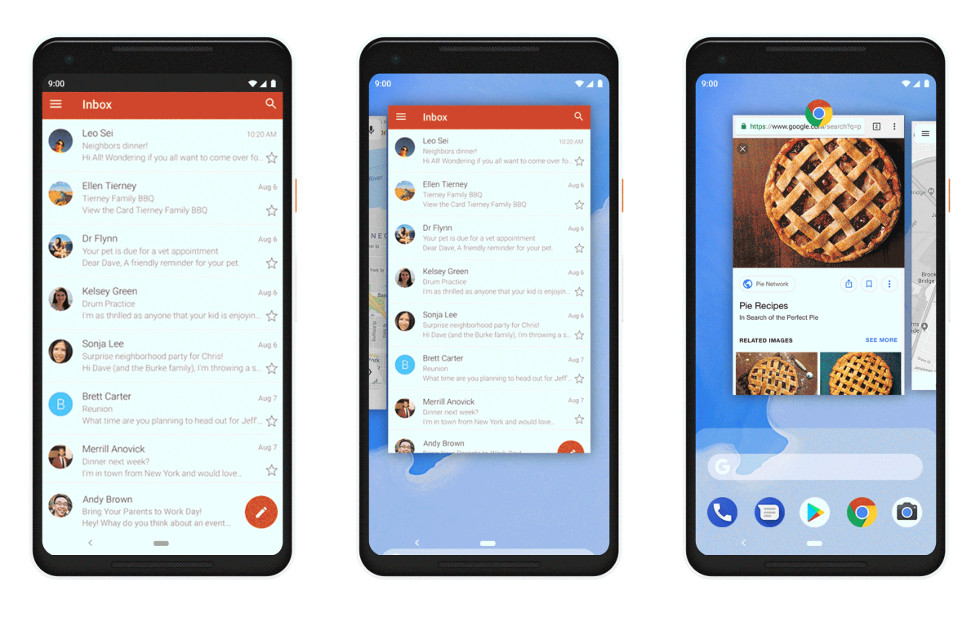 In Android Pie, Google begins to transition over to a gesture-based control scheme. At first, you’ll just see the home button. You’ll swipe up to multitask… but, uh, you’ll also be able to swipe right to multitask. There’ll be a back button, but only when an app can actually use it.

In some ways, this new control scheme will definitely complicate things, especially for less smartphone-savvy users. It’s hard to beat always-present buttons. But the gestures begin to move Android toward a much more flexible way of controlling the operating system, and one that, eventually, will likely help to free up screen space, too.

During the beta, Pie’s gesture controls didn’t get the warmest reception, but fortunately, you’ll have an option as to whether or not you want to use them. In fact, the gesture interface won’t even be activated by default  you’ll have to go into settings and turn it on yourself if you want to use it. 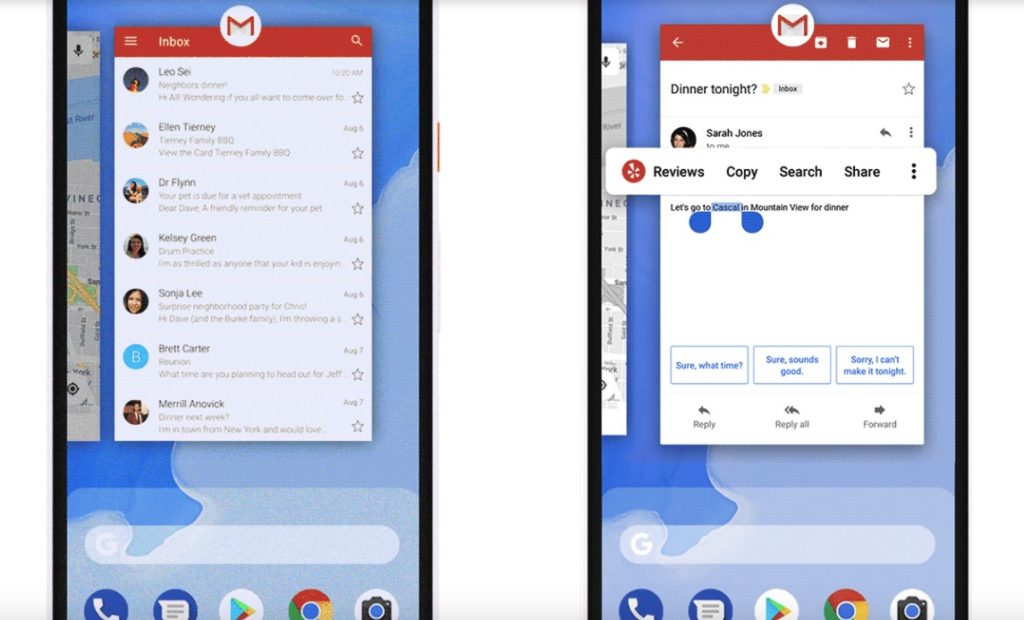 In Android Pie, you’ll be able to edit and mark up screenshots after taking them, instead of having to jump over to another app. There’ll also be an option to take a screenshot from the power menu, which will be handy for when you inevitably forget the multibutton shortcut.

Android’s built-in search is getting a lot more capable in Pie. Now, instead of just pulling up icons of installed apps, it’ll be able to pull up things you can do inside of apps, too.

The app drawer will also use that ability to intelligently suggest things for you to do. So instead of just presenting the button for Seamless, it might also show you a prompt to reorder your last meal.

This feature isn’t supposed to launch until the fall, and it isn’t available to beta test, although it looks like some of Google’s default apps already support suggestions in the app drawer.

Android Pie is available now for the Pixel, Pixel 2, and Essential Phone, so if you have one of those devices, you can start installing right away. If you have a phone that had access to the Android Pie beta then Google says you should get the update by the end of this fall. Some Android One phones will get the update in that timeframe, too.