Google’s upcoming phone Pixel 3 and Pixel 3 XL smartphones may be among the most leakeddevices in modern consumer electronics history. With just two weeks to go until the official October 9th press event, where both devices will be unveiled presumably alongside some other Google-made hardware products, we’re getting yet another visual leak of the handsets, courtesy of WinFuture. 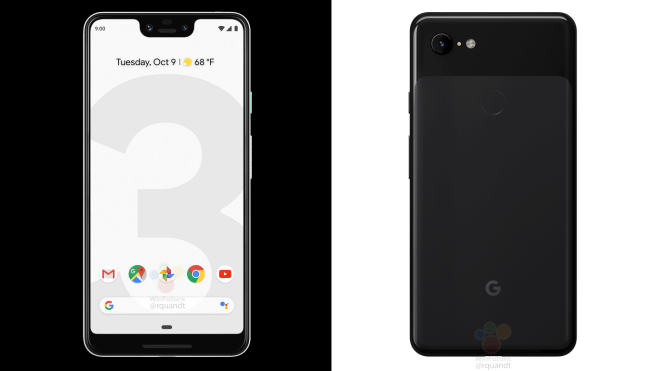 This comes after a torrent of leaks revealing what the devices look like and what the specs are, in addition to a look at a test device out in the wild when it was left in the backseat of a cab. This new leak, which includes a bunch of renders of the front and back of the devices, doesn’t tell us anything we don’t already know or have been almost certain of for quite some time now, thanks to prior leaks. The new set of images does, however, confirm the existence of white and black color options.

It’s also another look at what may be one of the official wallpapers for the device, featuring a large three splashed across a black or white background. Beyond that, past leaks have pretty much confirmed the specs of the devices, which will have better cameras, a Snapdragon 845 processor, and 4GB of RAM. Both will arrive running a stock version of Android Pie. The big difference between the standard Pixel 3 and the Pixel 3 XL will be the existence of a prominent notch on the XL variant. Samsung announces an LTE version of the Chromebook Plus V2