Elon Musk has recently removed Facebook pages of Tesla and Space X after being challenge to do so by his followers on Twitter. After Brian Action co- founder of whatsapp tweeted #deletefacebook Musk responded to the tweet by Whats Facebook  ?

Afterward a follower told musk that he should delete SpaceX and Tesla’s Facebook page if he is a man. After that many users started asked him why he was allowing Facebook pages for his companies to active. Musk claimed that he didn’t even know that he had one. But Later on both Tesla and Space X Facebook pages became inactive. Space X and Tesla has more than 2.6 millions followers on Facebook. 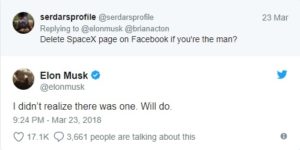 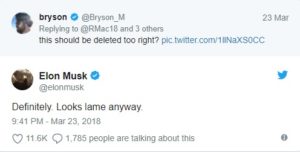 Despite Musk Has removed both pages from Facebook Space X and Tesla are still active on Instagram which is owned by Facebook. Not now but maybe Musk could also deactivate those if some one challenges him too.