Dismissing Union Finance Minister Arun Jaitley’s latest defence of the government over the choosing of an offset partner in the Rafale deal, Congress President Rahul Gandhi on Sunday, 23 September, asked him and Prime Minister Narendra Modi to “stop lying” and instead order for a JPC probe.

“It’s high time he, the RM and our Prime Minister stop lying and call a JPC to establish the full, un-corrupted truth about the Rafale scam,” he said.

Rahul was referring to Jaitley’s latest comment on the deal, where he launched a scathing attack on Rahul Gandhi for his comments and asserted that despite allegations, the deal will not be scrapped.

Speaking to ANI, the finance minister asserted that Rafale jets were cheaper than the negotiated price of the UPA-led government. The figures of the same were presented to the CAG, Jaitley said :

“Fortunately, there is pricing, and for security interest, that pricing can’t be disclosed in detail. But I have come as close to this. If you take a weaponised aircraft as of 2007, add the same two things to it again and bring it to 2016 level, the 2016 level is 20 percent cheaper. Now the CAG will go into pricing. They may not eventually disclose it, but about being 9 percent and 20 percent cheaper or not, they are looking into it. Congress has submitted a memorandum. The truth will come out.”

Jaitley claimed that former French president Francois Hollande’s statement was “orchestrated” and “in rhythm” with Rahul Gandhi’s tweet on 30 August. “I think he is in some kind of a revenge mode. I won’t be surprised if the whole thing is being orchestrated. On 30 August, why did he tweet “Just wait for a while, some bombs are going to be burst in Paris”? And then what happens is in perfect rhythm with what he predicted.”

However, when asked if he implied that Hollande and Gandhi were linked together, the finance minister said he didn’t know. Yet, he saw a “perfect coincidence” between the tweet and Hollande’s claims.

Rahul Gandhi tweeted this on 30 August : 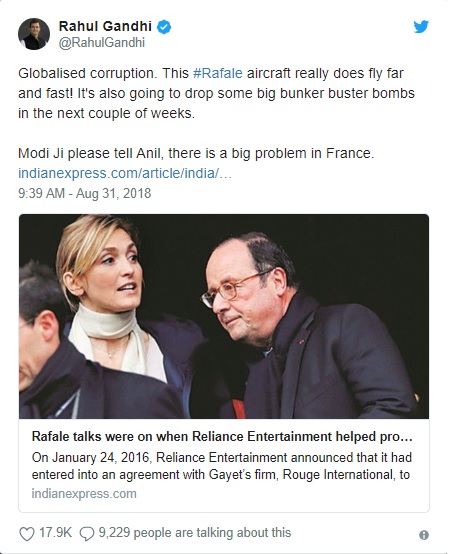 Former UP chief minister Akhilesh Yadav reacting to the blame-game between the Congress and the BJP told ANI that the need of the hour was the drawing up of a Joint Parliamentary Committee to take control of the situation.

“We demand a Joint Parliamentary Committee (JPC) on Rafale deal. Without a JPC the truth will not come out, the issue has now become global,” he said.

“My message to Mr Modi is very clear. He cannot escape. All those who will try to cover up the scam of the century will be exposed. This has global ramifications.”