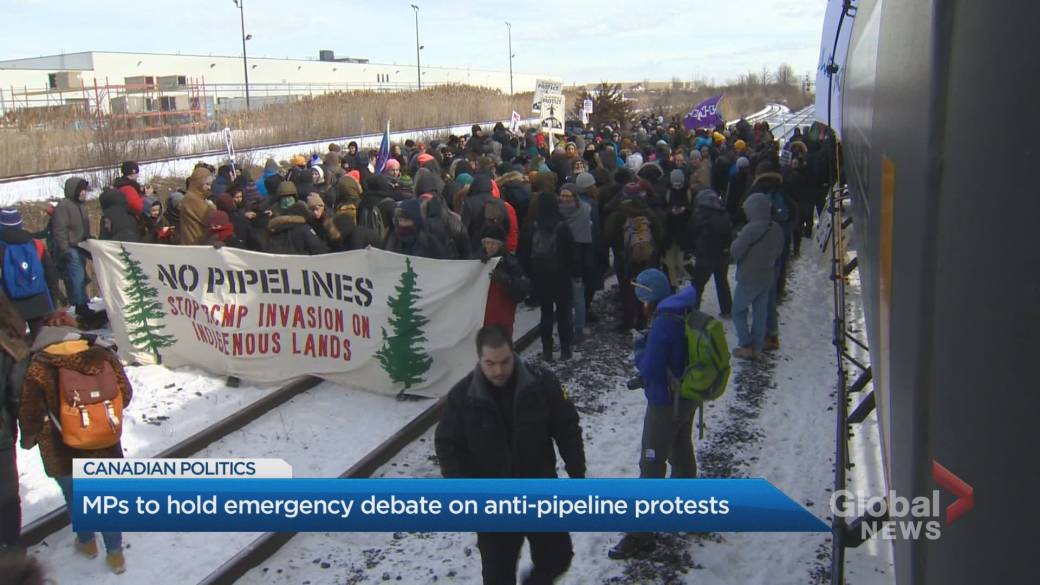 Protesters were served an injunction on Thursday but police did not physically force them to move.

After giving a short speech to reporters on Friday night, masked protesters who have been blocking a CN Rail line on Montreal’s South Shore abandoned their blockade.

It was tense throughout the day as counter-demonstrators and police negotiators tried to convince the protest group to leave as they had been blocking the busy commuter line since Wednesday.

The protesters were served an injunction Thursday evening, but many held their ground throughout the night, building snow forts, huddling around a barrel fire and sleeping in tents.

Finally, Longueuil officers, clad in black riot gear and wearing ski masks, stood in formation around the remaining protesters Friday. Officers closed St-Georges Street, that crosses the train tracks near the rail blockade and pushed media back from the site.

Officers gave time to the protesters until 5 p.m. to leave, but nothing physical happened and the riot police eventually left the scene despite Quebec Premier François Legault’s Wednesday promise to “dismantle the blockade” once the injunction was served.

Legault said Longueuil police would be in charge and use force if necessary.

By Friday evening, roughly 24 protesters remained on-site in a show of solidarity for Wet’suwet’en hereditary chiefs in BC, who are against a pipeline passing through traditional territory. Unlike most other rail blockades, the one in Saint-Lambert is not on Indigenous territory.

Before leaving at around 10 p.m., few protesters expressed their support for the hereditary chiefs, criticized colonialism and called for action.

They then hefted their colourful array of plastic shovels onto their shoulders and walked off into the night.

Riot police moved into their place, forming a line across the road and watching the protesters leave.

The encampment has been dismantled.

‘We are just trying to be pacifists’

I was just passing by and I saw ‘Hey, these guys are doing the right thing,'” he said.

He feels their protest has been portrayed negatively in the media, but in person, “they are all good people over there in the camp.”

Girard said he was moved to join them because he feels the climate crisis is an issue that can’t be ignored. He hopes the stand-off between protesters and police won’t lead to violence.

“We’re trying to be pacifists, we’re not trying to cause trouble,” he said.

A special case in Saint-Lambert

He said that “it’s ​frustrating to watch a small group of people who are depriving the citizens of Longueuil of access to commuter trains,” adding that the protest is not taking place on Indigenous land, neither it is led by Indigenous people.

“These people have got nothing to do with Indigenous people,” he said.