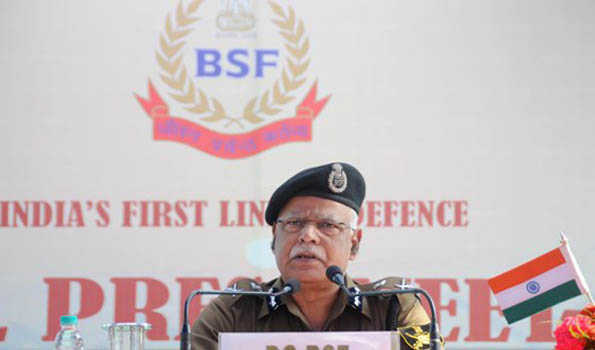 BSF Director General Rajni Kant Mishra on Friday said in his statement that the Kartarpur road corridor between India and Pakistan will not be a security challenge for the force as it has already been handling Wagah-Attari International Border (IB) that witnesses cross over of lots of people.

Mishra made the remarks while speaking to reporters, who asked him whether the corridor will be a security threat to India and lead to rise in the Khalistani movement. “We are deployed at the border and we are tasked to tackle crime and that could be anything, including terrorist activities,” he said.

The BSF and their counterpart, Pakistan Rangers, daily conduct the beating retreat ceremony at the Attari-Wagah border.

On the other hand, the foundation stones for developing the Kartarpur corridor on either side of the border were laid by India and Pakistan this week. The corridor links the Gurdwara Darbar Sahib in Pakistan’s Kartarpur- the final resting place of the Sikh religion’s founder Guru Nanak Dev- to Dera Baba Nanak shrine in India’s Gurdaspur district.

The Kartarpur Sahib is located about four kilometres from the Dera Baba Nanak shrine. At the foundation stone laying of the corridor on the Pakistani side, Pakistan Prime Minister Imran Khan pushed for peace talks with India, adding that its government and army are on the same page.

However, the BSF DG said that infiltration, sniping and cross border firing has become a “regular affair” on the International Border (IB) in Jammu. He added that “misadventure” of Pakistan has always been given a befitting reply and a “comprehensive retaliation plan” was worked out earlier this year. “The BSF responded in a targeted and deliberate manner so that the Rangers were pinned down and confined to their posts…BSF surgically targeted Pakistan posts in retaliatory firing which resulted in heavy losses to Pak Rangers,” he said.

Terming the September BAT action resulting in the killing of a BSF Jawan as “serious” and “unfortunate”, Mishra said that the force is undertaking a scientific analysis of such incidents and sniping. “We will come out with suggestions on what actions to take to prevent these actions and if it requires to undertake civil or mechanical work,” he said.

To protect BSF troops from cross border firing, including sniping, the force has developed bullet-proof bunkers to provide better protection, he said. He also added that the BSF is “satisfied” with the two pilot projects of the latest anti-infiltration system called Comprehensive Integrated Border Management System (CIBMS), which has been deployed along the IB in Jammu. “The data collected from the pilot projects in Jammu is being audited by technical experts, so that we can fine tune the gadgets to get the effective results,” he said.