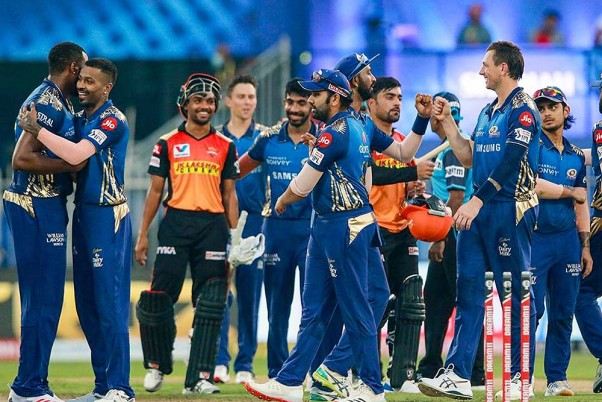 Mumbai Indians beat Sunrisers Hyderabad by 34 runs at the Sharjah Cricket Ground on Sunday. Fast bowlers Trent Boult, James Pattinson and Jasprit Bumrah picked up two wickets each, making it easy for the win over.

David Warner scored 60 off 44 balls but barring him no other batsmen could cross 30. In the first innings, Krunal Pandya hit an unbeaten 20 off 4 balls, and along with some fireworks from Kieron Pollard, took Mumbai Indians to 208/5 against batting first.

MI lost captain Rohit Sharma early. Suryakumar Yadav entertained with 27 off 18 balls but it was the 78-run partnership between Quinton de Kock and Ishan Kishan that brought MI back.

De Kock recorded his maiden half-century of the season and top-scored with 65 off 39 balls before SRH dismissed him and Kishan in quick succession, the latter dismissed by a beauty of a catch from Manish Pandey in the deep. But later Pollard, Hardik Pandya and Krunal ensured that MI crossed the 200-run mark.