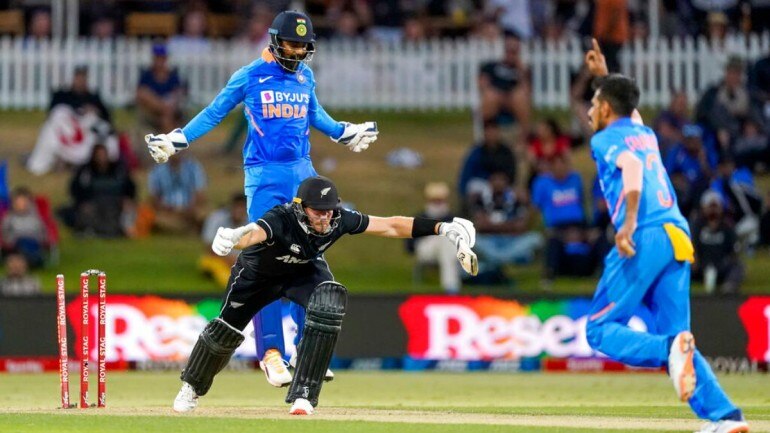 In New Zealand, Virat Kohli got an idea about the problem MS Dhoni faced.

On most away tours during his captaincy, MS Dhoni used to complain about the lack of a genuine seam bowling all-rounder at his disposal. His successor Virat Kohli was better placed with Hardik Pandya considering as a reliable lower-middle-order batsman who could consistently clock 140 kph-plus on the speed gun.

However, in New Zealand, Kohli got an idea about the problem of how Dhoni faced in this regard. With Pandya out injured, he had to bank on pacers who could bat a bit – Shardul Thakur and Navdeep Saini – to get the balance of his playing XI right. The selectors had picked Shivam Dubey in place of Pandya’s replacement but the Mumbai player’s not-too-impressive performances prompted Kohli to keep him out of the final XI. With Jasprit Bumrah being strangely off-colour, India was found wanting in wicket-taking threat as well as economy.

The Kiwis, on the other hand, had experienced seam bowling all-rounders in Colin de Grandhomme and James Neesham. They bowled crucial overs in the ODI series and de Grandhomme on Tuesday also scored a blistering unbeaten 58 from 28 deliveries, making the 297-run chase a cakewalk in the end.

The hosts were missing the injured Trent Boult, Matt Henry and Lockie Ferguson, but those available did a commendable job. Tim Southee, who had a dreadful outing during the T20Is, kicked-off the 50-over-format in similar fashion. The experienced Kiwi cricketer was the most expensive bowler from both the teams in the opening clash in Hamilton as he conceded 85/2 in his 10-over quota. His partner Hamish Bennett also struggled in the clash, conceding just eight runs less than the former.

Southee wrapped up the series with four wickets at an economy rate of 6.38 and Bennet, on the other hand, scalped six, including the 4/64 he delivered at Mount Maunganui on Tuesday.

Apart from the duo, 6ft 8inch Kyle Jamieson emerged as another impressive seam bowling prospect from the New Zealand camp. The bowler, who basically operates in the early to mid-130s kph range, made a tremendous start to his ODI career and went on to finish with three wickets from two matches. His clinical line and length accompanied with the bounce that he generates due to his height saw the Indians struggle, thus helping him finish at the top of the bowling chart in economy terms. He also played a vital hand with the bat in the second ODI and went to stitch a 76-run partnership with Ross Taylor, which eventually cost India the match

Leggie Yuzvendra Chahal known as India’s leading wicket-taker for the series with six scalps in two matches. Left-arm spinner Ravindra Jadeja, who featured in all three encounters, was effective in cutting down runs but got only two wickets while Kuldeep Yadav was more expensive in his sole outing.

Meanwhile, the Indian seamers between them bowled almost 86 overs and took just five of the 19 New Zealand wickets to fall in the series.

Aside from struggling to provide the team with crucial breakthroughs, the Indian seamers failed to check the free flow of runs too. Shradul, in person, was the most expensive out of the four as he conceded over eight runs an over in the first and third match of the series.

Saini, who made his fifth ODI appearance on Tuesday, was smashed for 68 runs in his eight overs at an expensive economy of 8.50.