Recently Facebook announced that they have inform their 14 million users about a bug because which they have accidentally shared some posts publicly.

Facebook disclosed today that the was bug became live last month and have switched the suggested sharing settings to public on some users posts. Facebook generally set the settings according to user preference or based on user’s previously activities. But because of some software errors the default sharing setting were set to public even if user’s have share it with small group of peoples.

Facebook said that this bug became active from between 18th May to 27th May, and even though the company stopped the error on 22nd May, Facebook could not revert posts to the previous settings until five days later. The company is sending a notification to all it’s 14 million users who were affected by this bug, now they has set their posts to the suggested settings as they were before. 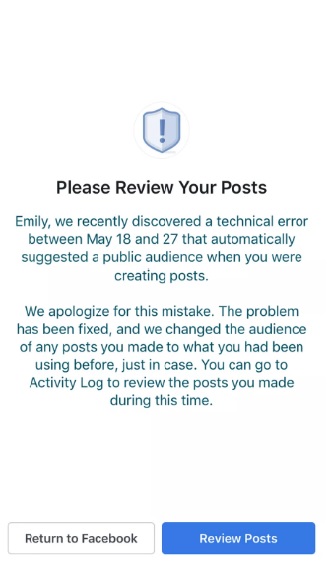 Facebook said that we have fixed the issue and starting from today we are informing every affected users to know about it and are asking them to review any posts they made during that time, Facebook chief privacy officer Erin Egan said in a statement that “To be clear, this bug did not impact anything people had posted before — and they could still choose their audience just as they always have. We’d like to apologize for this mistake.”