YesOJO has recently announced a new portable speaker dock that turns your Switch into a miniature boombox.

The Switch speaker dock is designed to use with a Switch in tabletop mode, but YesOJO says it should offer dramatically better sound than the Switch’s onboard speaker (in addition to a far more sturdy base). The speaker dock also features a cooling system, so your console doesn’t overheat, and an integrated battery that should allow for eight to 12 hours of play time off a single charge. If you don’t need to juice up your Switch, you can just use it as a Bluetooth speaker and a regular power bank.

YesOJO hasn’t announced all the details for the speaker dock yet like the actual specs, pricing, or release date but we do know that it’ll be launching as a crowdfunded Indiegogo campaign sometime in early 2019. 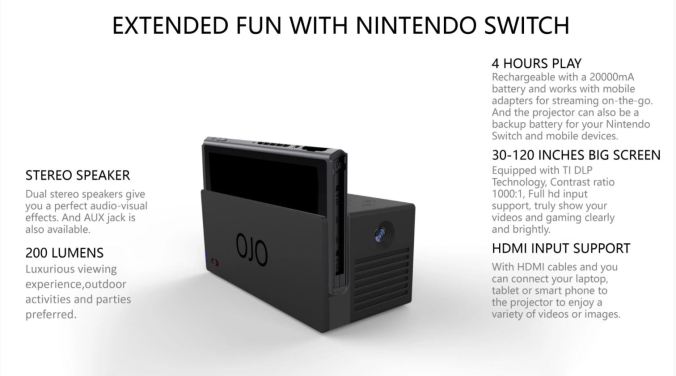 If the original $379 projector dock is anything to go by, it’ll likely be more expensive than a separate speaker and power pack, but it’s a price that might be worth paying for the convenience, especially if you plan on using your Switch on the go a lot.