Twitter has announced it’s permanently suspended the accounts of conspiracy theory website Infowars and its controversial founder, Alex Jones. It’s been a month since companies like Apple, Facebook, and YouTube removed the conspiracy theorist and his blog from their platforms. And now Twitter said that the Infowars creator had violated its “abusive behavior” rules.

Twitter at last deemed Jones went too far after he tweeted a video of himself confronting a CNN reporter, calling him an equivalent of “the Hitler Youth” and using other disturbing imagery to disparage him.

Over these month Twitter has hesitated with what to do about Jones. On August 6th, Apple banned Jones’ podcasts then YouTube deleted his channel, and Facebook wiped out multiple pages he ran. As multiple tech companies turned their backs on Jones and his hate speech toward immigrants and minorities, Twitter was the main platform left still equivocating.

But now Twitter finally admitted that Jones had violated its rules at least seven times. But still, those violations didn’t seem to merit a full ban. Twitter moved toward punishing Jones by suspending him for a week for inciting violence. In response to the inaction, users on Twitter mobilized, following a campaign started by Grab Your Wallet founder Shannon Coulter. Users were able to block a list of Fortune 500 companies through a tool and prevent their ads from appearing on timelines, as way to push Twitter to act faster. 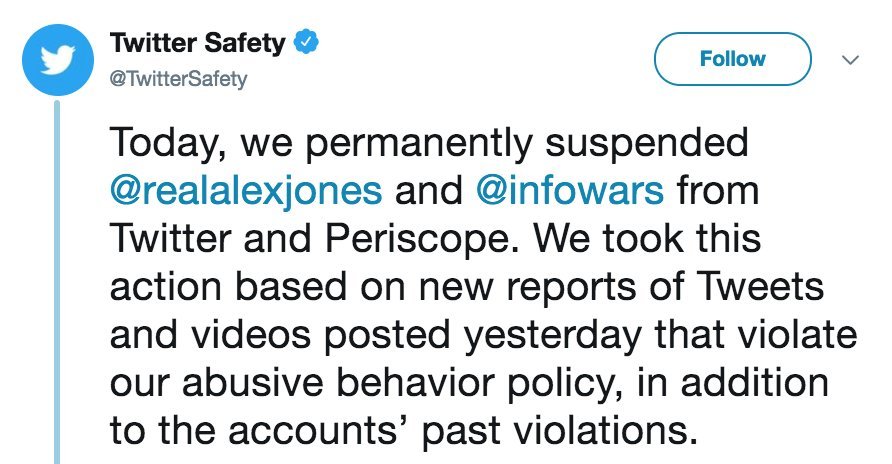 Speaking to The Daily Beast, a Twitter spokesperson attributed the ban on to a heated confrontation with CNN reporter Oliver Darcy, which was broadcast on Periscope. Jones is quoted as saying Darcy had “the eyes of a rat,” and accused CNN of wishing to police the Internet.

Twitter has, however issue Jones with a temporary seven day ban last month after he broadcast a video where he encouraged his viewers to “act on the enemy before they do a false flag.” Vivek Oberoi to play as Narendra Modi in upcoming Biopic