With the great effort and score of Shikhar Dhawan and Rohit Sharma India got their biggest ever win over Pakistan in the Super Four round of the Asia Cup on Sunday, 23 September. The duo scored a century each, and stitched a record 210-run opening partnership as the defending champions won by 9 wickets, their biggest victory margin against Pakistan in ODIs.

After Dhawan was run out for 114 in the 34th over, captain Rohit along with Ambati Rayudu helped India chase their 238-run target, and seal their fourth straight win in the tournament.

Regular skipper Virat Kohli, who has been rested for this tournament, congratulated the team on their “great win” while Sachin Tendulkar also congratulate the team for their victory over Pakistan : 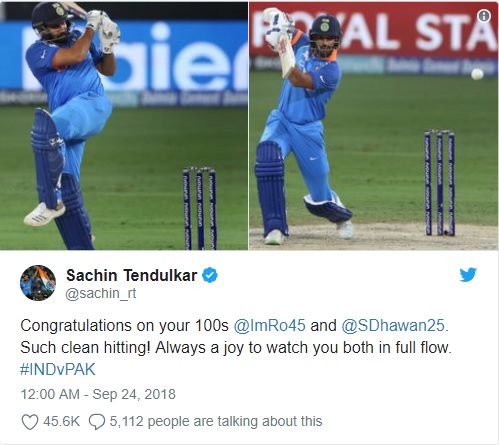