On Sunday morning, the United Launch Alliance successfully launched one of its most powerful rocket, the Delta IV Heavy, carrying a spacecraft bound for the Sun. On top of the rocket was NASA’s Parker Solar Probe, embarking on the first ever mission into the Sun’s atmosphere, known as the corona. Because of big lift from the Delta IV, the Parker Solar Probe will get closer to the Sun than any human made vehicle has been before a mere 4 million miles away.

Getting to the Sun is actually super difficult. That’s because the Earth is moving sideways relative to the Sun at about 67,000 miles per hour, according to NASA. In order to journey to the center of the Solar System, the Parker Solar Probe will basically have to cancel out that speed by moving in the opposite direction to Earth. The vehicle needed a lot of power when it launched. That’s where the Delta IV Heavy came in.

Delta IV Heavy had even more thrust than usual. The rocket, which consists of three rocket cores strapped together, sported a special third stage on top of its center booster from Northrop Grumman. It’s a stage that runs on solid rocket propellant, designed to give an extra boost to the spacecraft to put it on its path to the Sun. 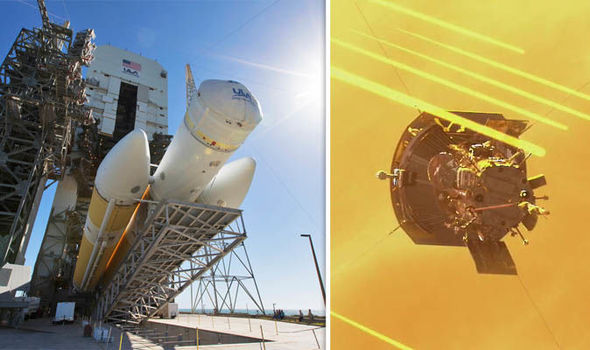 Over the course of its seven year mission, it will perform seven flybys of Venus, using the planet’s gravity to go even faster and spiral in closer toward the center of the Solar System. Eventually, Parker will clock a speed of 430,000 miles per hour, making it the fastest moving space vehicle by far. The next fastest vehicle was Helios 2, another spacecraft meant to study the Sun, that reached a speed of more than 220,000 miles per hour when it moved away from Earth.

Once in the Sun’s corona a region that reaches more than 3 million degrees Fahrenheit Parker will study the energetic particles in the region to solve the mysteries about this area of the Solar System. For one thing, the corona is about 300 times hotter than the surface of the Sun, which doesn’t make much sense to researchers. Additionally, the corona is constantly breaking away from the Sun, flowing outward and bathing the planets in the Solar System. NASA wants to know how that happens.

The Delta IV Heavy carrying Parker took off at 3:31AM ET from Cape Canaveral, Florida on Sunday, August 12th. It was originally supposed to launch Saturday morning, but was aborted just before take off at 4:29AM ET due to a pressure alarm. You can watch NASA’s replay of the launch above.