Former tennis champion Martina Navratilova criticised Slam winner Serena Williams about her actions in her US Open final against Naomi Osaka on 8 September.

In one of the most controversial Grand Slam finals, Serena was handed three code violations by chair umpire Carlos Ramos during the course of the match. The 36-year-old star tennis player was cited for: getting coaching signals; breaking her racket, which cost her a point; and for calling the chair umpire a “thief”, which cost her a game.

After being handed the third penalty, Serena had pointed out that her male counterparts on the tour had gotten away with saying a lot more to officials on court. However, 18-time Grand Slam champion Navratilova felt that a comparison of men and women was wrong.

I don’t believe it’s a good idea to apply a standard of “If men can get away with it, women should be able to, too.” Rather, I think the question we have to ask ourselves is this: What is the right way to behave to honour our sport and to respect our opponents?

This was the third conflict with an official for Williams at the US Open, following her infamous attack after a foot fault in the 2009 semi-finals against Kim Clijsters, and a dispute over a hindrance call in the 2011 final against Sam Stosur. 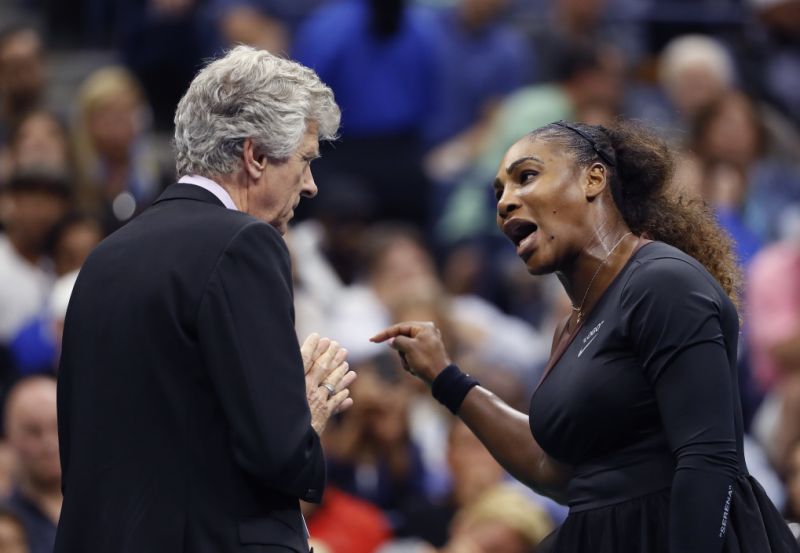 After protesting against the first two penalties handed to her for coaching and smashing her racket, Serena got into another argument with the umpire.

“For you to attack my character is wrong. You owe me an apology. Say it. Say you are sorry,” she said before making the statement that was detrimental in the result of the match.

“You stole a point from me, you are a thief too,” she said while getting up and returning to her side of the court. “Code violation,” Ramos announced on the mic, adding that this time he would dock her an entire game.

This penalty, Serena later said, seemed like a ‘sexist remark’ to her. “I’ve seen other men call other umpires several things. I’m here fighting for women’s rights and for equality and for all kinds of stuff. For me to say ‘thief,’ and for him to take a game, it made me feel like it was a sexist remark. He’s never taken a game from a man because they said ‘thief,” Serena had said in her press conference.

All of this US Open history, combined, perhaps, with always feeling like an outsider in the game of tennis  I know exactly how that feels  goes some way toward explaining why Ms Williams reacted the way she did, and most of all, how she just couldn’t let go. But what is clear is she could very much not let go,” wrote Navratilova.

Navratilova, however  said that debating whether Serena could have gotten away with calling the umpire a ‘thief’ if she were a male player, is missing the point.

She also said that “There have been many times when I was playing that I wanted to break my racket into a thousand pieces. Then I thought about the kids watching. And I grudgingly held on to that racket.”