It took the former Real Madrid forward nearly 320 minutes to score his first league goal for Juventus and he did it with the simplest of tap-ins. Ronaldo doubled his tally shortly after as the Bianconeri beat Sassuolo 2-1 in Serie A on Sunday.

It was Ronaldo’s fourth league match for Juventus since his Serie A record 112 million euro move from Madrid and the relief on his face was obvious as he tore away in celebration after breaking his duck in the 50th minute.

Ronaldo ran to the corner flag with his arms outstretched and displaying a huge grin. He then jumped in the air as he turned back to the field and waited to be embraced by almost all his teammates, who ran over to celebrate with him. 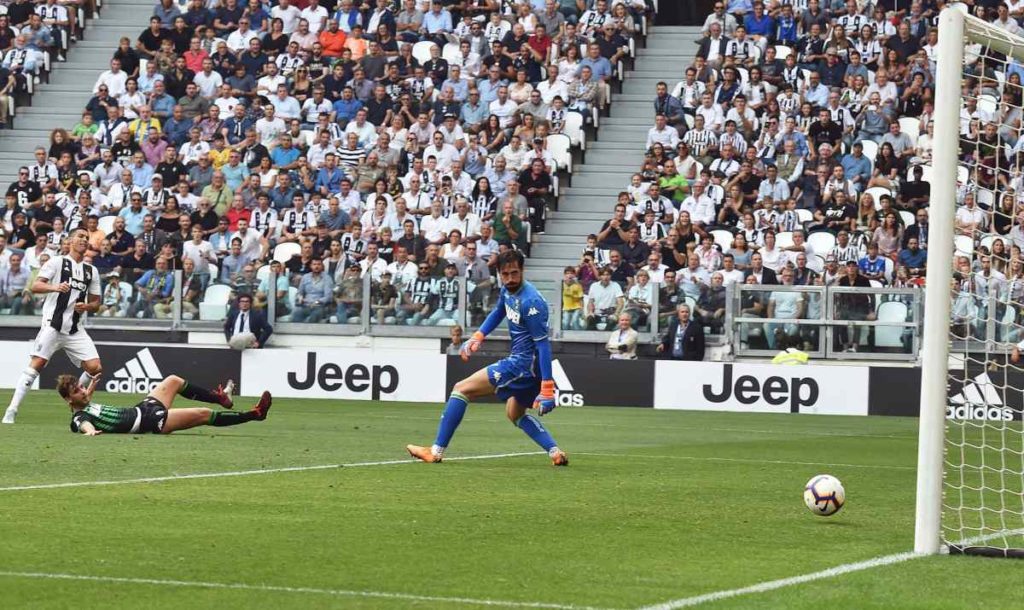 “I wanted to score, I’m really happy,” said Ronaldo, who had missed several good chances in previous games. “That’s football. What’s most important is to win and to do well. Certainly there was a bit of pressure in general after my move from Real, there was a lot of expectation. That’s life, I’m working well. My teammates are helping me hugely to adapt to this new league.”

His first goal came after Sassuolo defender Gian Marco Ferrari could only head a Juventus corner onto the left post and Ronaldo was waiting to volley in a rebound from less than two yards out.

The Portugal forward had scored his first league goal in his fourth match last season for Real Madrid.

Ronaldo added a second 15 minutes later when he finished off a swift counterattack with a precise finish into the bottom right corner.

The five-time Ballon d’Or winner was denied a hat trick by a fine save from Sassuolo goalkeeper Andrea Consigli, while he also mishit a clear opportunity late on.

Substitute Khouma Babacar pulled one back for Sassuolo in the final minute.

Douglas Costa had seemingly elbowed Sassuolo’s Federico Di Francesco in the buildup to that goal and, as the pair continued to argue, the Juventus midfielder appeared to head butt his opponent.

Costa was lucky to only be shown a yellow card at first but he received a straight red moments later after video review showed he had also spat at Di Francesco. The Brazil international risks a lengthy ban.

Juventus, which is seeking a record extending eighth successive Serie A title, is the only team still with a perfect record. It was Sassuolo’s first defeat of the season. ICC Assures BCCI regarding his concerns about India’s Security